Shirley Bell was the poetry editor of The Blue Nib (2017-2019) and Impspired  magazine (2019-2020). She is a widely published and anthologised poet and an exhibited mixed media artist.  All of her published poetry from 1982 to early 2016 can be found in her collection, Dark is a Way and Light is a Place. Her latest collection, The Still Room, new and selected poems, was published by The Blue Nib  in 2018.  She has been a writer in residence and workshop tutor and has read at many venues throughout the UK, including the South Bank Centre. 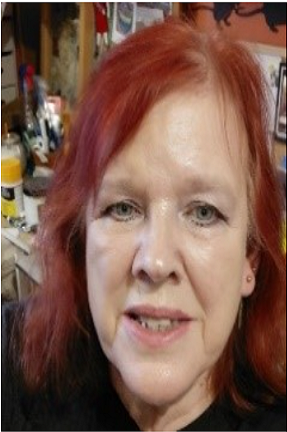 You can find more information on Shirley and her work on her website:-

The fields are flat and brown, it’s hard to think
they’ll ever stand high with corn, flare with rape
again this summer. For now the scarecrows lurch
at crazy angles. They trail old coats and rags.
Polythene bags flap around the suggestions of
their shoulders. And yet the wind lifts
their shoddy clothes and they are touched with
magic; they always seem about to fly.

It’s Sunday and I’ve taken you to Chapel.
Everything is grey and earnest. There’s no
incense here, though a sense of well-meaning
sifts gently through the air. I don’t think I belong.
It’s Lent and the sermon is all about temptation.
I feel I would not pass those tests. Now I see
distraction in the corner of my eyes; a painting.
When I can, I take a picture on my phone.

It shows me strips of cloth, snarled around
an empty cross, a tenuous fabric
lifting in air currents, tangled with light.
Something. Nothing. Faith, elusive as a sigh.
A scarecrow pinned to a stick.
Leaning forwards, with the wind stirring its tatters.
And always on the point of alteration,
by some sudden unexpected angle of the sun.

From Behind the Glass, Redplantpress, 2013.